Big Law firms flocking to Texas are now finding themselves in the middle of the battle over abortion rights.
Joe Sohm/Visions of America/Universal Images Group via Getty Images

Texas has emerged as ground zero in the fight over abortion rights, but many major law firms in the state are so far staying on the sidelines.

Roughly two-thirds of the 70 largest law firms with Texas offices have not publicly said whether they will cover employees’ costs to travel for abortions, now that the procedure is largely banned in the state. That’s despite pledges from several major corporations and some competitors to pick up the tab for employees who travel out of state to end a pregnancy.

Major firms flocking to Texas in the last few years followed a steady stream of corporate clients wooed by low costs and a pro-business climate. They’re now forced to reckon with the state’s sharp new restrictions on abortion, including a law targeting those who “aid and abet” reproductive health services.

“On this, what they do, will influence everybody else,” Ralph Baxter, former chair of Orrick Herrington & Sutcliffe, said of law firms in the state. “If they duck and cover that will influence people, too.”

Sidley Austin has already been threatened with criminal prosecution and disbarment by a group of Texas Republicans accusing the firm of violating the “bounty” law. Other major firms pledging to cover abortion travel costs include White & Case, Morgan Lewis & Bockius, Gibson Dunn & Crutcher, McDermott Will & Emery and Vinson & Elkins, one of Texas’ oldest law firms.

Texas-founded firms Baker Botts, Locke Lord and Haynes & Boone are among those who have yet to say whether they will offer similar aid. The group also includes heavyweights, like DLA Piper, Norton Rose Fulbright, Skadden Arps Slate Meagher & Flom, and Willkie Farr & Gallagher. 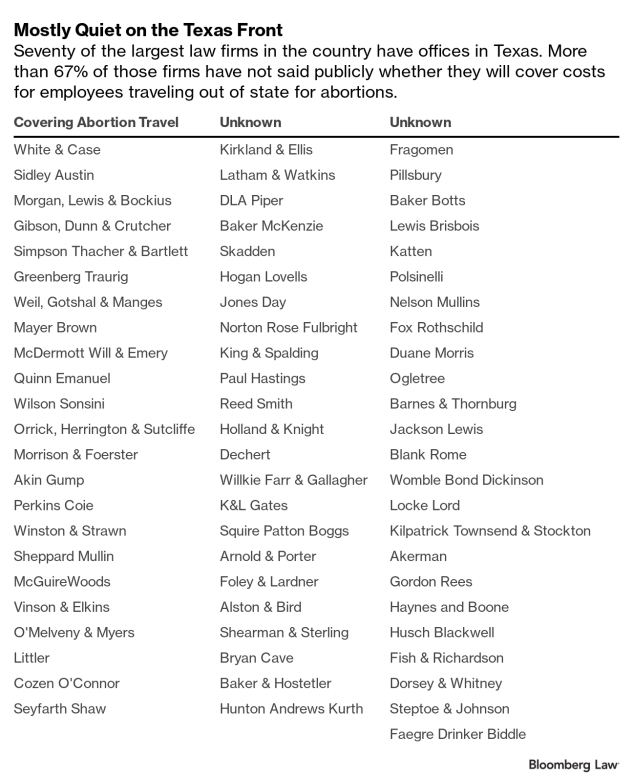 Firms are often governed by partners with varying viewpoints, Baxter said. Some may be taking time since the US Supreme Court scrapped the constitutional right to an abortion to read the pulse of their two most important constituencies: clients and employees.

“When they do get a good reading, they’re going to see that supporting the women has the support of their clients and their people,” he said.

The Texas Freedom Caucus—a group of GOP state lawmakers—targeted Sidley in a July 7 letter to Yvette Ostolaza, the Dallas-based chair of the firm’s management committee. By aiding employees seeking abortions, the firm is “exposing itself and each of its partners to felony criminal prosecution and disbarment,” the group warned. It also said the lawmakers plan to introduce new legislation curbing abortion aid.

Texas Rep. Mayes Middleton, chair of the Freedom Caucus, has not responded to multiple requests for comment. Sidley declined to discuss the situation.

The Chicago-founded firm has had a footprint in Texas for decades, but several of its competitors are much newer to the state.

Firms have arrived in droves, seeking energy industry work in Houston, corporate business from the likes of ExxonMobil, AT&T, and American Airlines in Dallas and a piece of the growing tech space in Austin, which has welcomed Oracle and several startups to the capital city.

“Law firms generally follow money and talent and accordingly many have invested heavily in Texas in recent years,” Kent Zimmermann, a law firm consultant, said in an interview. 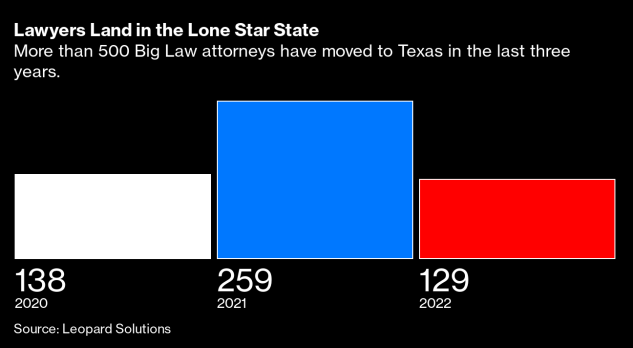 Reed Smith, Shearman & Sterling, Kirkland & Ellis and Quinn Emanuel Urquhart & Sullivan are among those planting flags in Houston and Dallas. Kirkland and Quinn, along with Gunderson Dettmer, Latham & Watkins, McDermott Will & Emery, Perkins Coie, O’Melveny & Myers, have also opened up offices in Austin.

More than 550 lawyers at the 200 largest firms have relocated to Texas in the last three years, either joining new firms or remaining with their employers, according to data from Leopard Solutions.

Akin Gump—which was founded in Dallas and has offices in Fort Worth, Houston, and San Antonio—is among the firms touting abortion assistance for employees since the Supreme Court’s June 24 decision in Dobbs v. Jackson Women’s Health Organization.

“For nearly 50 years, we have had the ability to make decisions on the path our lives will take and to have access to the full range of health services in the most personal of decisions,” Kim Koopersmith, the firm’s chairperson, said in a firmwide email shortly after the ruling. “From today forward, some of us will continue to have those options and others won’t.”

Today’s historic decision is the culmination of generations of Pro-Life activism in defense of the unborn.

Texas’ laws are clear – abortion is now unlawful in the Lone Star State.

I will work tirelessly to ensure our laws are fully enforced and Life is protected in Texas.

Some law firms have likely yet to take a public stance because of the highly politicized nature of the issue, said Jack Hopper, a legal recruiter in Houston and Austin with Kinney Recruiting.

The wait puts women at risk, according to Sehla Ashai, a civil rights lawyer based in Dallas.

“Lawyers who are not doing everything at their disposal to protect the rights of people affected by Dobbs are sending a clear message as to where you stand in our list of priorities,” she said.

Law firms that stay on the sidelines may face recruiting consequences, Hopper said.

“I’d find it a lot harder to recruit for a firm that doesn’t feel as strongly about this issue as Sidley and the other firms,” he said. “We want to work for those folks that have ethics and morals and care about their employees because that’s part of the pitch that we make to candidates.”

“It’s going to give us a very strong value proposition to put in front of potential candidates for those firms that have shown the backbone to come out publicly and risk,” Hopper said.

Two women associates at Big Law firms in Texas said they won’t leave their firms if they don’t commit to covering abortion travel costs. But it might be a dealbreaker for new law school graduates weighing job offers, said the women, who spoke on condition of anonymity due to employment concerns.

One of the associates, working at a large firm in Houston, said she worries policies that restrict abortion access could disproportionately keep women from becoming partners.

Roughly 15% of Texans backed a complete ban on abortion access in a University of Texas/Texas Politics Project poll conducted primarily in the week before Supreme Court’s ruling.

“If you’re a law firm, or a traditional company, and you’re in a fight for the best and brightest people, it’s not going to be in the interests of the firm or the company to take positions that are at odds with the values of most of the people it’s trying to keep and attract,” Zimmermann said.

Deena Shanker and Justin Wise contributed to this story.

(Updated with additional information on Texas Freedom Caucus. previous version of this story was updated to correct the Texas population figure in the 13th paragraph.)