Simpson Thacher & Bartlett is once again Big Law’s top mergers and acquisitions adviser as global deals activity fell in the third quarter to its lowest mark since 2020.

Deals activity dropped to $704 billion in the third quarter, a low not seen since the second quarter of 2020 when global markets ground to halt due to the coronavirus pandemic. The markets quickly rebounded as the pandemic took hold, propelling global M&A activity to record highs over the last two years.

The latest slowdown marks the end of that frenzied transactional market, which fueled double-digit growth in revenue and profits per equity partner for several top law firms.

“For a long time, more or less, all the drivers were hitting on all cylinders,” said Kirkland & Ellis corporate partner Sarkis Jebejian. “We’re now in a more mixed period and, while some of the traditional drivers are very much still there, some of them have gone in the other direction.”

That’s dampened the market and left dealmakers wondering what lies ahead.

“In all sorts of areas people are thinking about whether this is just a reversion to the mean, or if it is going to get worse,” Jebejian said.

Top of the Table

Simpson Thacher topped the Bloomberg league tables in total deal volume by principal for the third-straight quarter, advising on 142 deals worth $346.7 billion so far in 2022.

“We’ve got a deep and talented group of deal lawyers, and you couple that with a roster of terrific clients, many of whom are the most creative dealmakers in the business, and I think that’s what propelled our success for the first three quarters,” Swedenberg said. 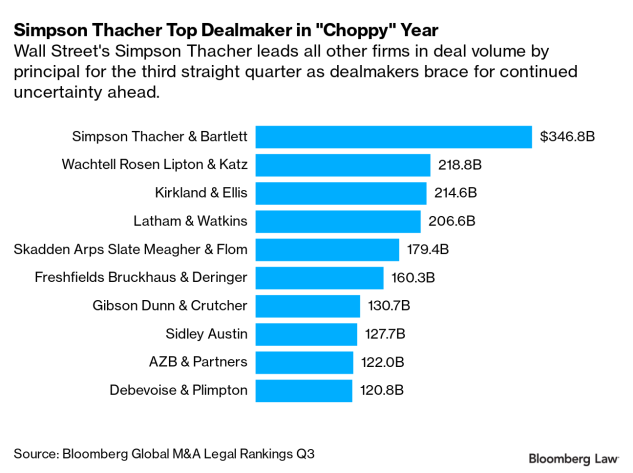 The Chicago-founded firm advised Vista Equity Partners on its $16.5 billion acquisition of software company Citrix Systems, along with an affiliate of Elliott Investment Management earlier this year. In September, the firm advised private equity real estate investor Oak Street in an acquisition with GIC of STORE Capital Corp. for $14 billion.

“We, as a firm—across the board, across all our offices—have built an M&A practice that’s really designed to be successful throughout different market cycles, and because we’re not focused on any particular industry or any sector of the market, we are able to go where the activity is,” Jebejian said.

Cooley’s M&A practice is smaller than some of the other firms atop the deal count rankings, said Barbara Borden, the group’s co-chair.

“It’s great when we can punch above our size,” Borden said.

Silicon Valley-founded Cooley is know for its work in the technology and life sciences space. Tech was a bright spot in the otherwise down M&A market, accounting for $526.3 billion across the first three quarters of 2022.

The firm’s M&A work feeds off of a large and diversified base of corporate clients, both public and private, rather than concentrating on a few big players, Borden said. She noted that the firm also works with many repeat buy-side clients that are not a part of its day-to-day corporate client base.

Deal activity reached $1.01 trillion in the first quarter of this year, plummeting 40% from the previous quarter.

Activity rebounded slightly in the second quarter, with deals reaching $1.07 trillion before falling again to $704 billion over the three months ending in September. 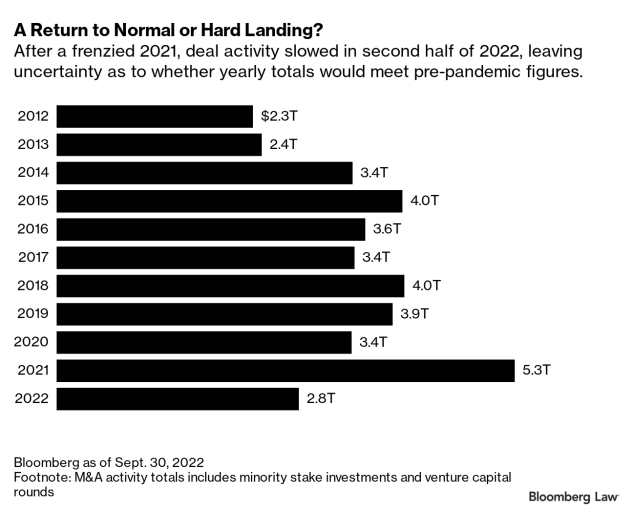 “Anyone who looks at the numbers will see that it has been a choppier year and a choppier market for M&A,” Jebejian said.

SPACs were responsible for a significant portion of deal value last year, as many transactions had to get done in the acquisition window after an initial public offering, said Iman Anabtawi, a UCLA law professor who specializes in mergers and acquisitions.

The SPAC craze has since all but halted . Interest rate uncertainty and concerns about the cost of financing and earnings volatility are making people a lot more cautious.

Some bright spots still driving deals include the strengthening of supply chains and the narrowing of the IPO window, which might prompt sellers to look at M&A as an exit strategy, she said.

Clients are still looking to put capital to work through deals, Kirkland’s Jebejian said. But financing is becoming tougher and more expensive and valuation alignment poses a hurdle.

“I would argue that we are back to more normal markets, although there may be a slight depression because of valuation concerns,” Borden added.

Coupled with equity and debt market volatility is the enhanced regulatory environment that dealmakers now must navigate.

The slower third quarter is likely a sign of what’s ahead, the dealmakers said.

“I will not be surprised if what we see over the course of the next quarter, or into the beginning of next year, is a little bit of a dip below normal,” Swedenburg said.

To contact the reporter on this story: in New York at mtribe@bloomberglaw.com

To contact the editors responsible for this story: at copfer@bloomberglaw.com; John Hughes at jhughes@bloombergindustry.com